Making their mark on the industry by elevating the stoner experience, V Syndicate’s creative smoking accessories are sure to impress– like the Grinder Card and its growing line of Rollin' Trays that make smoking weed easier than ever.

V Syndicate has focused on developing artistic versatile accessories that allow users to grind and roll while expressing their personality. With colorful accessories like their popular rolling trays, V Syndicate hopes their functional objet d’art will keep you coming back for more.

In addition to collaborating with cannabis icons such as Wiz Khalifa, Cheech and Chong, and Snoop Dogg, V Syndicate has produced an expressive line of products and reconfigured smoking accessories into creative and convenient objects with cutting-edge design. Considering how complex the modern world is nowadays, it's good to realize that smoking weed can still be a simple, laid-back affair.

Since V Syndicate got into the industry, storage containers, ashtrays, and particularly rolling trays will never be the same. This company is always discovering new ways to turn devices into innovative accessories for the modern-day stoner.

Part of V Syndicate's success is because their line of products features stoner favorites, like Rick and Morty, Alice in Wonderland, Van Gogh, and Einstein, the company's best-selling weed representative to date.

According to the V Syndicate CEO, Tom Scharf, he was in Canada in 2010 when his vision for the Grinder Card originated. He saw his girlfriend grind her weed with her credit card basically by rubbing a bud over the raised card numbers, and it ground the weed down very well.

He thought he could make a viable item out of this. He just wanted to make the card more durable and look more legitimate, which led to the idea of a stainless steel variation of it. That's essentially the story of the Grinder Card.

Then in Los Angeles at Hemp Con two months later, he was doing his first show. He saw customer reactions to it and it was a hit at the show. This was only a prototype, but the idea was definitely a winner.

V Syndicate had been working with IP protection and licensing Wiz Khalifa, Cheech and Chong, and Snoop Dog at that time. He had these totally cool celebrity collaborations, but then that kind of plateaued.

The Grinder Card was a very cool idea for many people, but ultimately it became an even cooler free gift. That’s because it's really not the best alternative to a real grinder. Still, it had a fantastic run for about seven years, and then he decided to do something else.

When he decided to do something else, his European distributor came up with the concept for the Rollin’ Trays. V Syndicate started with a small tray line and was delighted by how well they caught on.

Rolling trays really are a must-have accessory for every smoker. Not only will rolling trays catch material that falls when rolling a joint, but they also keep everything organized. So, when you’re ready to smoke, you can put all your essential items such as your rolling papers, grinder, filter, and lighter on the tray and just carry everything all together.

The market was still flat in 2017. There were only a few brands that were quite boring. Customers didn't have many choices. But V Syndicate made the trays into a creative expression for the company and for its customers. Every tray was considered art and the public reaction was extremely positive.

The line of Metal Rollin’ Trays is quite straightforward. V Syndicate didn't reinvent the wheel but they made sure that they used good quality steel at the right thickness. When it came to the graphics, they focused on the details. To ensure high quality, they ran samples beforehand to make certain everything was clean.

V Syndicate made sure that the packaging was beautiful as well to encourage retailers to display them, and they made sure it had their logo on it as well. They wanted the trays to look like genuine products, not like other trays that were cheap knock-offs, so they took extra care with that.

Shatter-resistant Glass Rollin’ Trays launched after that. They're easy to care for and look great with glass pipes and bongs. Initially with the glass rolling trays, no material was available that was also budget-friendly. V Syndicate meant to offer the quality of the glass trays equal to their metal trays because performance and style are so important. But, they also needed the glass to be strong.

Their metal trays are popular because even if you drop them, they don't break. So V Syndicate opted for shatter-resistant tempered borosilicate glass for their metal trays, which is like the material used for phone screens. Dropping it from about 10 feet it still might shatter so it's not shatter-proof, but the glass is still very strong. In this way, they were able to make their trays affordable.

With the Hybrid Rollin’ Trays, V Syndicate wanted to cater to those who like to smoke flower and oil, so they integrated silicone with metal. They created the Dabit Card, a product that looks like the Grinder Card, but it has magnetic dab tools rather than a grinder. It has a silicone pad that covers the tools to keep them clean which means you can put it in your purse or pocket without getting everything sticky.

Among their most successful lines of character-branded products is their Alice in Wonderland characters. Because they are so popular, V Syndicate just came out with a couple more variations. Their all-time hit though is Einstein. Maybe because Einstein has been associated with mind expansion, he’s become an icon among stoners. They also really concentrated on the colors used with Einstein. In their designs, color is a huge component, and they work hard to make them all engaging and vivid.

At Headshop, we carry a collection of V Syndicate rolling trays with creative designs to express your smoking style and personality. We have large and small rolling trays and hybrid trays crafted from either glass or metal depending on your preference. 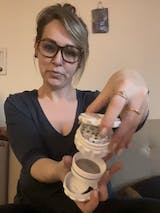